The langalló is a kind of bread, similar like lángos (fried dough), but baked in furnace and served with sour cream.

Dödölle is a traditional Hungarian food. A simple, quite heavy but to me very delicious food. Actually I didnt know that it was called dödölle. When I tried it for the first time here in the Buda Castle, I immediately recognised it by its taste that it was what my grandma used to cook during my childhood. 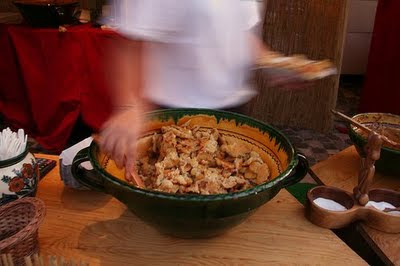 But she called it ganca. The way she served and prepared it was a bit different but the taste was more or less the same. What is dödölle or ganca? Basically it is potato. You cook the potato in salty water and then smash it. The smashed potato has to be mixed with flour. It was quite hard job for my grandma as she was close to 80. So any time I wanted to eat ganca, she made it only if I helped her with the flour mixture. 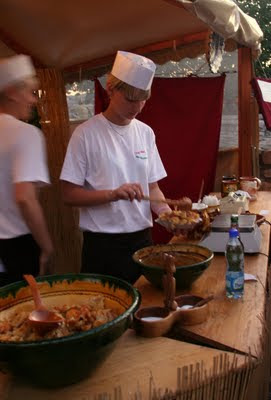 The ganca/dödölle tastes the best if after cooking, you continue with one more step by putting it back on the fire making it a bit 'fried' by browning it in the pan, with the help of a little oil too. Some cut it into little pieces (like on the photos here) while smashing together with the flour and preparing in the motion like this. My grandma handled it all together in a pot and baked it for a very short time, then shaping it as a thick pancake.


With a generous amount of fried onion and sour cream as its toppings and you got your lunch! I do not recommend it as a dinner unless you have worked 12 hours prior in the fields:) 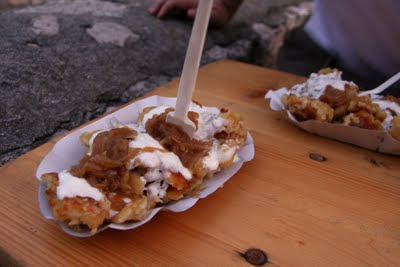