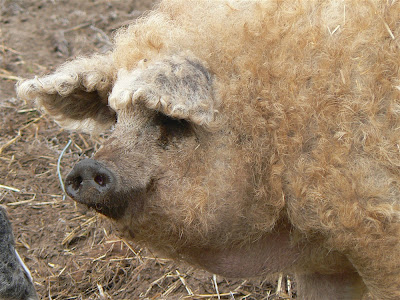 
The products, which made of Mangalica are healthy. The light cholesterol has a curative effect against heavy cholesterol in white pig. The composition of meat and bacon have also a curative effect on podagra. It is considered as a rare product in Hungary. This is the gap which MOE is trying to fill with the Mangalica products.
You may read more information about these products here.

The event will be in the Vajdahunyad Castle.

Vajdahunyad Castle is situated in the City Park of Budapest, which I like very much not only in summer, but in winter too.
The Castle (which is visible in the background) was built for the Millenarian Exhibition in 1896 to represent the different architectural styles of Hungary. It is a copy in part of a castle in Transylvania, Romania, that is also called Vajdahunyad. Originally it was made from cardboard and wood, but it became so popular that it was rebuilt from stone and brick. Today it houses the Agricultural Museum. In the front there's an ice skating rink, which is one of the largest and oldest open air ice rinks in Europe. It is open to the public every day in the winter season.


I chose the rác carp (rácponty in Hungarian) for today's recommendation. Despite this being a typical Christmas food, but I like it very much and I would love to eat every day :) 
Cook 1 kilo (or more) potatoes in their jackets in salty water, peel and slice them. Put them into a greased pan add salt and place on the top 800 gr salted carp, larded with bacon. (Be careful with the salt, because the bacon is salty already.) Add finely chopped onion, sprinkle with red paprika powder. Cover with sliced green peppers, tomatoes and onion circles. Add 2 deciliters of sour cream, a little water and oil. Bake in the oven until the fish is tender.


I usually bake rác fish from sliced tuna fillet, and my family loves it too.

Anyway rác is a name formerly used in Hungarian to designate South Slavic peoples (Serbs, Bunjevci, Šokci) who lived in the Pannonian plain during Hungarian, Ottoman, and Habsburg administration. Because many of them originated from the medieval Serbian state of Rascia (Raska), they were named after this state. Since the mid-nineteenth century the name was used almost exclusively for the Serbs. A lot of Hungarian towns and villages keep this name, for example Rácalmás, Ráckeresztúr and Ráckeve.
(Source)

This is view of Ráckeve. I really love this town and its surroundings along River Danube. I'm sure you like it too :) So try my rác fish recipe and if you travel to my country don't forget to visit this wonderful part of Hungary too!

Have a nice day!

I'm sure if you hear the name of Hungarian Gerbeaud, you associate with it the Café Gerbeaud in heart of Budapest.

But to me, this word "Gerbaued" means this wonderful and delicious home made cake, which is ground walnut and jam filling between layers of sponge covered with chocolate. To be honest I've never baked it, but my grandma used to bake every year at Christmas time.


Actually the cake got the name after Emil Gerbeaud. 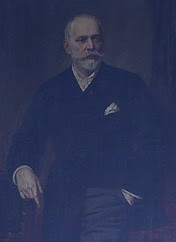 Emil Gerbeaud came from a confectioner family from Geneva (Genf) and was an outstandingly talented confectioner and chocolate manufacturer. He worked for several of the greatest confectioneries in Europe, including Germany, France and England. On 1st October, 1884 he arrived in Hungary and entered into partnership with Henrik Kugler in his confectioner's shop in the present-day Vörösmarty square.
Emil Gerbaud's name was closely associated with the confectionery industry, its quick transformation and development at the end of the 19th century in Hungary. The Hungarian confectionery industry became widely-known in Europe through Gerbaud, it is due to him that it achieved world-wide fame. The predecessor of the Gerbaud was the Kugler confectioner's, for Henrik Kugler took over their confectioner's shop in 1858 from his father, enlarged and moved it to the present-day Vörösmarty square in 1870 by the name of Kugler Confectioner's. The family of the owner worked in the same profession. Kugler, with his refined taste and artistry, considerably raised the standard of his shop. It was him who brought petits fours into fashion in Hungary, a confectionery that was called "kugler" in 1920. 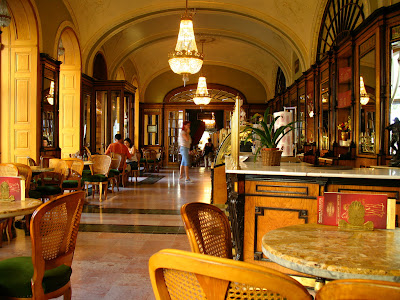 
The shop was taken over by a worthy successor. Master confectioner Emil Gerbaud became the new owner. The confectioner's shop still bears his name. The shop became an example of professional exaction under his management. He is said to have personally smashed those petits fours the color of which he did not consider as acceptable. The furnishing was splendid, and the confectioneries, let alone the waiting, were excellent.
Gerbaud introduced various cakes filled with butter cream, fancy cakes, petits fours and tea-biscuits to confectioners and customers. It was his "workshop" that first made delicacies filled with French cream in Hungary. 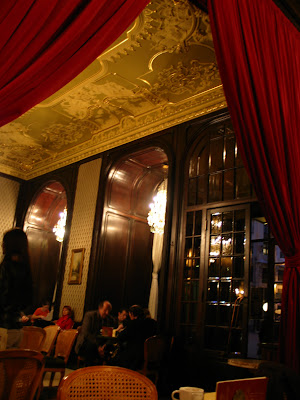 
What was Gerbaud's secret? This man with his interesting character brought the French spirit that was gaining ground in arts and social life to a confectioner's. The shop was furnished by its owner with the obvious purpose to compete with the most elegant coffee shops of the boulevards in Paris. He brought the French taste and the atmosphere of Paris. He was a real artist: he himself designed for example the special fancy-boxes for bonbons. The bonbons wrapped into the wooden boxes of the shop were much liked beyond the frontiers of the country. The sweets were eaten up quickly, however, the boxes used as ornaments can still be seen in a lot of homes, for grandma's sawing kit and love letters were kept in them
The later owners worked hard to keep the good reputation, character and furnishing of the confectionery. The name 'Gerbaud' is still famous; the Gerbaud Confectioner's is still the most important confectioner's shop in Hungary.
Source


I'm afraid nowadays the Gerbeaud Cafe is not a cheap place, but wonderful and certainly there you can order an authentic gerbeaud cake :) 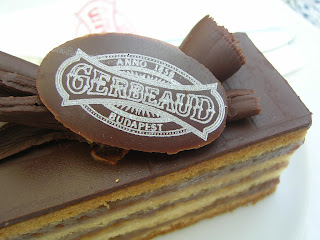