My task is to share with you the gems and secrets of the Hungarian Culinary.


Last week I've shared with you the recipe of the stuffed cabbage. Today I would like to share with you another Hungarian stuffed specialty.


What can you see on this picture? Do you have any idea? 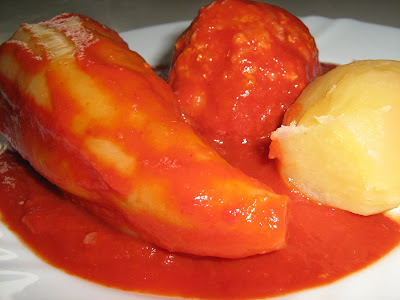 
This is the Hungarian Stuffed Green Pepper, we call it "Töltött paprika"


To be honest I cook stuffed green pepper pretty rarely, I don’t know why, but of course I know the recipe :)


1. Cut the top of the green peppers and remove the seeds and stems. Set aside.
2. Heat the oil (or lard) in a large pot over medium-high flame. Add thinly slice onions and sauté until translucent and starting to brown. Cook the white rice until half soft. Mix the meat with half cooked rice and egg, and the chopped onion. Add salt, pepper and paprika (if you like garlic, you may add two cloves of pressed garlic too)
3. Stuff each pepper with an equal amount of meat mixture, then place staffed peppers in large pot of boiling water. Cover pot and cook until ground meat is fully cooked and rice is tender.
4. Preaper a roux from the flour and oil (or lard), pour in the tomato juice, flavor with sugar and salt, then pour over the stuffed green peppers and cook about five or ten minutes.
5. Serve peppers with sauce sponned over top and with salt cooked potato.


Try it and you won’t be disappointed!


P.s. What can you do if you want to taste the Hungarian stuffed green pepper, but you don’t want to prepare by yourself?
Don’t hesitate, travel to Hungary! Zsolt knows a good restaurant in Budapest, where you can order it :) 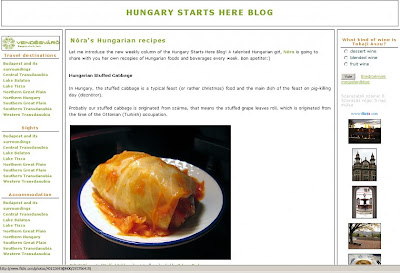 Couple of months ago I’ve started this blog about the Hungarian foods and beverages, because I think that the Hungarian culinary traditions and specialties are really treasures.


Two weeks ago Zsolt wrote me an e-mail and he has invited me to open a new weekly column on the Hungary Starts Here blog, where I can introduce the gems and secrets of the Hungarian culinary and share my own recipes of Hungarian food and beverages every week.
(More details you can read here.)

Hope you will follow and enjoy my new adventure! 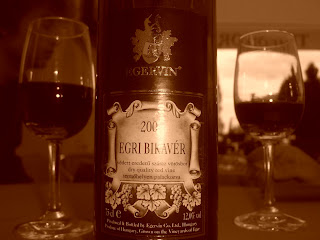 
According to legend, the name originates from the invasion of Suleiman the Magnificent around 1552.
"To motivate and support the small group of soldiers during the Siege of Eger castle they were served delicious food and a lot of red wine. Among the Turkish soldiers it was rumored that bull's blood was mixed into the red wine, as otherwise the strength and firm resistance of the town and castle of Eger could not be explained. Finally the enemy gave up."
It has been suggested that the term Bikavér was coined by poet János Garay in 1846.
Source: wikipedia 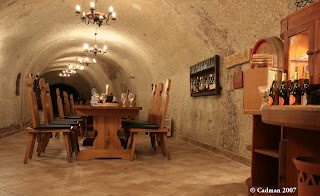 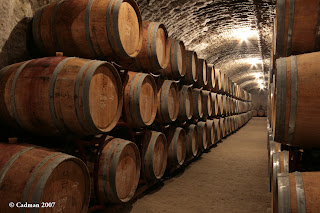 In Eger not only the wines are delicious, but the historical town is also fascinating and the whole countryside is very beautiful. 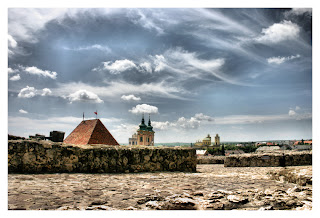 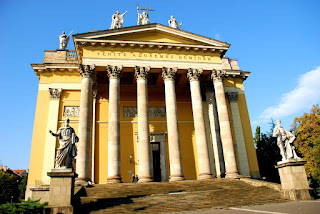 I’m sure that you have ever heard about the Hungarian Bogrács, or Hungarian bogrács gulyás (goulash). Actually do you know what is the exactly meaning of bogrács?
Bogrács means the big pot over the wood fire, like on these pictures. 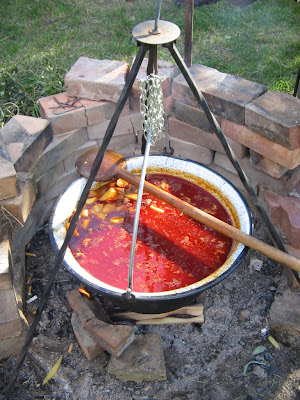 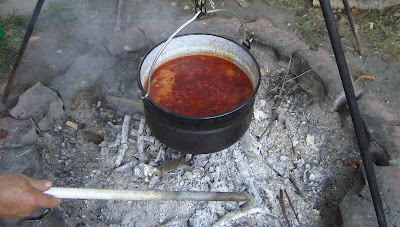 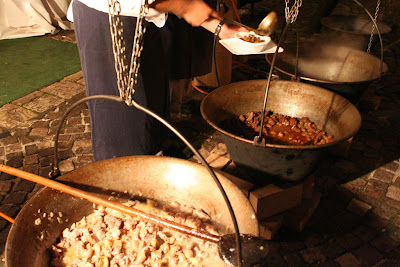 
Our "bogrács" word is Ottoman Turk of origin "bakrac" means copper-kettle and the use of the stew-pot is originated in the nomad civilization, which you can read more about here. 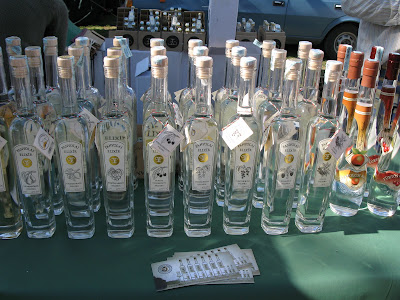 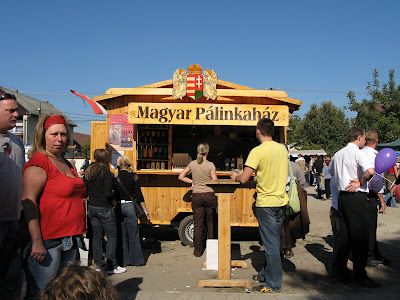 Pálinka is a traditional part of Hungarian hospitality, so no visitor of Hungary should even dream of escaping a tot! Mind you, whoever has heard of the Hungarians’ “firewater,” or whose friends have already visited Hungary and spoken about it, will not be trying to avoid but rather to seek out the experience; to try out this most Hungarian of drinks, pálinka. The name pálinka can only be used for those products distilled from 100% fruit – that is, without added alcohol or artificial aromas – and with an alcohol content of at least 37.5%.


Different distilled drinks are consumed all over the world, and their constituents vary greatly according to region, country, climate and natural conditions. Until the 16th century spirits were used as medications, as is borne out by the European term aqua vitae (water of life) and its variants in different languages.


Pálinka should never be chilled, for its bouquet can only be fully appreciated at hand temperature. It’s worth carrying out the “dry test”: After downing the first glass, put it aside for five to ten minutes, and then inhale into the second. If you are drinking real pálinka you will only be able to detect the aroma of pure fruit.


Pálinka is one of our national treasures. It should be respected and never over-indulged. After all, the twice-two-centilitres which is the recommended adult daily dose works just as well as an appetiser as to stave of the cold in winter or the heat of summer…
(Source) 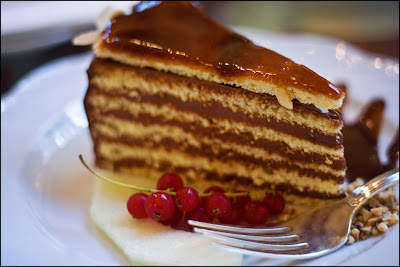 
Dobos Cake is a special Hungarian cake, perhaps one of the most famous in the world, invented by and named after a well-known Hungarian confectioner, József C. Dobos (1847-1924) in 1884. It is a five-layer lemon, saffron or vanilla sponge cake, layered with chocolate buttercream and topped with thin caramel slices. The sides of the cake are often coated with ground hazelnuts, chestnuts, walnuts or almonds or cookie crumbs. Dobos's aim was to make a cake that would last longer than other pastries, in an age when cooling techniques were limited. The caramel topping helps keep the cake from drying out. Coincidentally but fittingly, dob means "drum" and dobos means "drummer" in Hungarian, and the round cake with its flat top is very drum-like. The cake is also often called 'Dobos-torta' or 'Dobostorta'.


Dobos ("DOE-boesh" /'doboš/) Cake was first introduced at the National General Exhibition of Budapest in 1885, Sissi and Franz Joseph I were among the first to taste it. The cake soon became popular throughout Europe as it was different from all others. It was simple but elegant, as opposed to the multi-storey, flaming cakes of the age. Its other secret was its use of fine buttercream, which was very little known at the time; cake fillings and frostings were usually made with cooked pastry cream or whipped cream. The chocolate buttercream and the batter of the cake were both invented by Jozsef C. Dobos.


Dobos travelled around Europe and introduced the cake wherever he went. For a long time he kept the exact recipe confidential, until 1906 when he retired and gave the original recipe to the Budapest Confectioners' and Gingerbread Makers' Chamber of Industry, providing that every member of the chamber can use it freely.


Dobos Cake is known everywhere in the world and there are more than one hundred recipe variations. It is a commonly made torte in the upscale hotels, restaurants and pastry shops of the world. Another famous Hungarian dessert created in the same era is Rigo Jancsi. (Source: wikipedia)